On Friday at PAX East, we presented our first of two panels, titled “Collaborative Homebrew 101: The Cure for the Common Murder Hobo.” 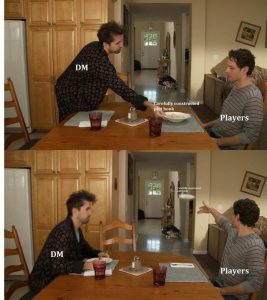 In the panel we discussed the phenomenon of the “murder hobo,” the players in role-playing games who discard whatever adventure hooks the game master has planned, preferring to wander around the countryside aimlessly killing, stealing, and sleeping outdoors.   This can cause friction between the players and the game master, and in the panel we discuss two reasons why players resort to “murderhoboing.” 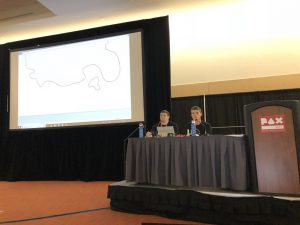 We use Dungeons and Dragons in our therapeutic social skills groups, and see this phenomenon pretty regularly.  We use a method we call “the rumor system” to get player buy-in, which helps them feel empowered as participants in our collaborative game. It involves making a map with the players, then generating some adventure hooks collaboratively with the players.

We had the opportunity to use the rumor system with an audience of several hundred people!

Watch the video below:

Special thanks to Eric Kanius and Chelsea Smith for filming for us again!  They’ve filmed a few other of our panels in the past and do amazing work.  Check out some of our other panels here.